Red Sun Revival: It would be a waste of ability to tame anyone in the band 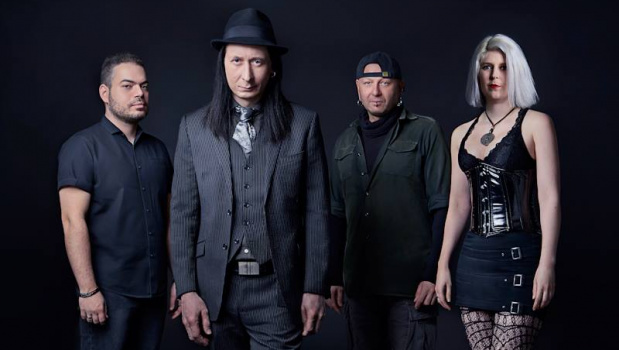 Of powerful lineup consisted of Fields/Eden House members, molecular biology, current state of the current of UK scene, the new record and many other interesting stuff with Rob.

SANCTUARY.CZ: HEY ROB, HOW ARE YOU? HOW IS WINTER IN LONDON?

Rob: Hi, I’m doing well, thanks for asking. We’re having a fairly typical British winter, it snowed a bit at the end of last week and half a centimetre of snow was more than enough to shut half the schools in the country and wreak havoc on the roads and railways. Otherwise it’s just a bit cold and gloomy, but we had a marvellous summer last year so can’t really complain too bitterly.

SANCTUARY.CZ:  FIRST ALLOW ME TO START WITH A VERY STUPID QUESTION, PROBABLY ONE THAT EVERYONE ASKS YOU – WHAT IS THE MEANING OF THE NAME “RED SUN REVIVAL”? IT IS SOMETHING WE HAVE NOT BEEN ABLE TO DECIPHER…

Rob: Not a stupid question at all, but one that always makes me a little uncomfortable. I’m genuinely sorry for any time anyone might have spent trying to decipher the meaning of our name. It’s never easy to encapsulate a large number of artistic ideas in two or three words, and all we really sought to achieve was to create the right sort of mental imagery that reflected the music we play.

SANCTUARY.CZ: HAVE YOU EVER COME ACROSS SOMEONE WHO THOUGHT THAT YOU WERE A REAL “REVIVAL BAND”?

Rob: Fortunately not, I can imagine that would lead to a particularly awkward conversation. It wasn’t something I’d considered at the time but I starting to worry now!

SANCTUARY.CZ: OH, I DON’T THINK YOU HAVE TO… YOUR MUSICAL JOURNEY STARTED IN THE CAPITAL OF THE UK 8 YEARS AGO AND IT SEEMED TO US LIKE A SORT OF A “SUPERBAND”. I MEAN, EACH OF THE MEMBERS HAVE QUITE IMPRESSIVE MUSICAL BIOGRAPHIES, EVEN WHEN YOU STARTED. MEMBERS OF RED SUN REVIVAL HAVE PLAYED WITH SUCH BIG NAMES, LIKE FIELDS OF THE NEPHILIM, SEX GANG CHILDREN, THE EDEN HOUSE, VOICES OF MASADA…. WHERE DID YOU GUYS MEET AND HOW DID THE IDEA OF FORMING A BAND TOGETHER EMERGE?

Rob: We starting playing live in 2012, so about seven years ago I suppose, but I wrote the first album in my bedroom between 2007 and 2011, so it’s been a much longer journey for me. Before Red Sun Revival I’d really only been in two bands: Voices of Masada, and Adoration. I ended up in The Eden House more recently, although Simon was involved with TEH from long before. I met Christina around the time when I started writing ‘Running from the Dawn’ and as the material was taking on a somewhat orchestral flavour it seemed like a great idea to work with a violinist. We talked about it for years before it actually took the form of a band.

When things starting getting serious I realized that I didn’t really know anyone suitable to play bass. I posted an advert on the internet and arranged a couple of auditions, Panos was the only one that showed up, but it didn’t matter because I was convinced there and then that he was the right man for the job.

I’d known Simon for years through Adoration and The Eden House, and Simon actually recorded the drums on ‘Embers’ and ‘Identities’ as a guest musician. After we released Identities Simon agreed to play live with us, which had a tremendous effect on the live shows as we’d previously relied on pre-recorded drums.

SANCTUARY.CZ: IS IT DIFFICULT TO TAME FOUR INDIVIDUALS WITH SUCH A STRONG MUSICAL BACKGROUNDS REGARDING THE BAND’S DIRECTION, SONGS, MUSIC, AND SO ON?

Rob: I think it would be a waste of ability to try to tame anyone in Red Sun Revival. The band started off more or less as my own project, but we’ve started writing in a more collaborative manner, helped enormously by Simon’s involvement, as it’s so much easier to jam out ideas when a live drummer’s involved, especially one as talented as Simon. Everyone brings a lot to the table, creatively. 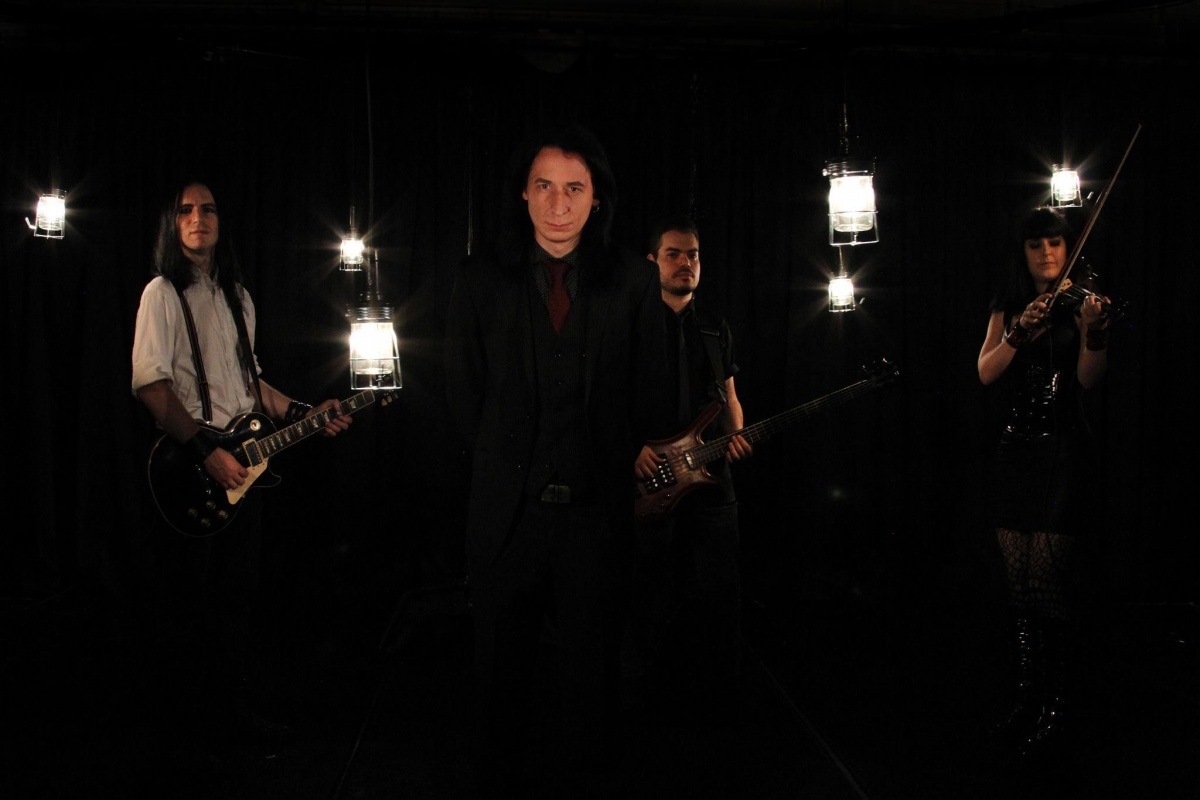 SANCTUARY.CZ: AMONG YOUR COLLABORATORS, THERE WAS ALSO MATT FROM PRETENTIOS MOI! DO YOU HAVE ANY INFO ABOUT THIS BAND? I MEAN THEIR DEBUT ALBUM WAS VERY FRESH YET STYLISH BUT WE HAVE NOT HEARD OF THEM FOR SOME… 8 YEARS OR SO… ARE THEY ARE STILL ALIVE?

Rob: I don’t know much regarding any upcoming releases or live shows with Pretentious, Moi! I do know that Tim Chandler (the band’s founding member) took over a decade to write the first album, so it could be a long wait for the next one. Tim and his wife got married back in 2012 and had a kid last year, so I guess things will have slowed down there. They are very much alive though!

SANCTUARY.CZ: ARE THERE ANY OTHER INTERESTING BANDS YOU WOULD RECOMMEND FROM THE CURRENT UK GOTH SCENE?

Rob: Sometime the Wolf are probably the most exciting new UK band for me right now. It’s not often you see new bands of that calibre in the scene anymore.

SANCTUARY.CZ: AND GENERALLY – HOW DO YOU SEE THE CURRENT STATE OF THE UK GOTH SCENE? IS IT GROWING, IS IT DECLINING…?

Rob: Well, I’d be lying if I told you that it was the same as it was twenty years ago, we’re all getting a bit older, and I suppose I’m a bit ignorant of the kinds of bands the younger generation are into these days. A year ago I was quite pessimistic about the state of things here, but I seem to keep seeing lots of new events cropping up here and there. The scene here has always ebbed and flowed and perhaps we’re moving into a move exciting time now.

SANCTUARY.CZ: YEAH, WE WOULD ALL LIKE TO SEE THAT! BY THE WAY – DO YOU THINK IT IS A SHAME FOR RED SUN REVIVAL THAT IT DID NOT APPEAR BACK IN THE 80S? IT MIGHT HAVE BEEN A SUPERBIG BAND I GUESS…

Rob: I suppose it is a shame, although I’ve been trying to write music in this genre since the early nineties so perhaps I’d never have managed in time even if I had been writing in the eighties, I’d have needed to have started in the 60s, and to a certain point, we’ve benefitted from years of experience, learning from other artists work, and numerous awful failed projects. I think if we could have sprang on the scene in 1984, fully formed as we are today, then we’d probably have done very well. But whether or not we could have or would have done is another question. 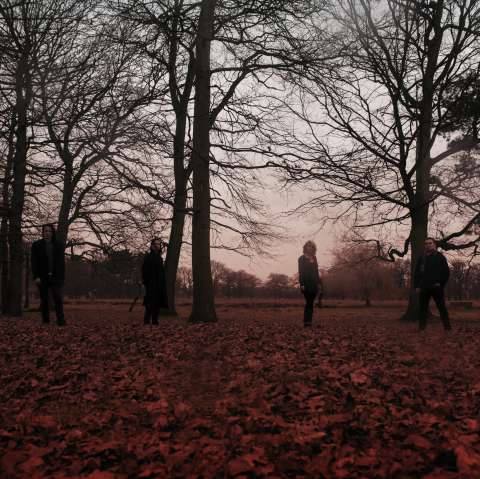 SANCTUARY.CZ: LET'S MOVE INTO MORE RECENT FUTURE. YOU HAVE TWO VERY PROFESSIONAL SOUNDING ALBUMS OUT SO FAR, AND THE THIRD ONE IS ON THE WAY. COULD YOU TELL US MORE ABOUT THE NEW RECORD?

Rob: This third album of ours has taken way longer than I would have liked, and that’s down to all kinds of reasons. We actually jammed out most of the initial ideas in the summer of 2017 but I’ve had very little time to forge those ideas into coherent songs since then. Some of the songs are at a far more advanced stage of completion than others, and so far I think the songs, the performances, and the arrangements are the best and the freshest work we’ve done. The song writing here has been more collaborative, but also more organic, less rigid and structured, and more varied. I can’t wait to release this album, but there’s still some work to do.

SANCTUARY.CZ: WILL STEPHEN CAREY OF THE EDEN HOUSE TAKE CARE OF THE NEW ALBUM AGAIN?

Rob: It’s probably a bit early to decide on mixing and production, we still have plenty of music to write and in my case, a mountain of lyrics to write. I think it’ll all come together quite quickly now though, and once we have the songs written we can have a think about what the next steps should be.

SANCTUARY.CZ: SURE, THAT MAKES SENSE… BY THE WAY, HOW MUCH DOES HE INFLUENCE THE SOUND AND FEEL OF YOUR RECORDS? IS IT AN IMPORTANT INVOLVEMENT REGARDING PRODUCTION OR JUST A SLIGHT HELP WITH THE SOUND?

Rob: Thinking back to 2007, I wanted to Steve to mix and produce the Red Sun Revival songs before I’d even written them. When I was still in Voices of Masada, well-mixed records seemed to elude us, with one exception. The exception was a re-mix from Steve of one of our songs and it occurred to me that we might have produced some very much better releases had we have asked Steve to mix the lot. I resolved not to make that mistake again and Steve was really my only choice to record our debut album. Steve adds a lot, in both mixing and in production, and he often comes up with lovely little ideas that bring a song alive. Our previous releases wouldn’t have been as good without his help.

SANCTUARY.CZ: I HOPE IT IS NOT A SECRET, BUT EXCEPT FOR WRITING MUSIC, YOU HAVE A VERY, VERY INTERESTING DAY JOB, TOO. COULD YOU TELL US MORE ABOUT IT?

Rob: No secret! I’m a molecular biologist, which is someone who manipulates DNA molecules, and genes, in order to ‘make’ proteins. These proteins are the building blocks of life, and include therapeutic targets for medicine, or even antibodies, which is the area I’m working in at the moment. Antibodies can be used in the treatment of cancer and other diseases, and part of my job is to overcome the difficulties inherent in producing large numbers, and large quantities of these antibodies.

SANCTUARY.CZ: THAT’S THE INTERESTING THING – HOW DOES THIS VERY STRICT AND EXACT ATTITUDE NEEDED FOR SCIENTIFIC WORK GO TOGETHER WITH SUCH DREAMY AND ABSTRACT SOUNDING MUSIC?

Rob: I think one is an escape from the other. That said, a methodical, scientific attitude can be useful when trying overcoming technical challenges, which are always many in bands, especially when you have a complicated set-up like ours. I think it can help with writing too, there’s a process that you follow, and the creative stuff flows more naturally if you give yourself the best chance by doing things in the right way.

SANCTUARY.CZ: I SEE. BUT LET’S TEST YOUR IMAGINATION ONCE MORE – IF WE SAY “PRAGUE”, WHAT IMAGE OR IDEAS APPEAR IN YOUR MIND?

SANCTUARY.CZ: OH THANK YOU! CAN YOU FEEL ANY DIFFERENCE BETWEEN PLAYING IN EUROPE AND PLAYING IN THE UK REGARDING PEOPLE’S REACTIONS?

Rob: I think every country is a little bit different, and it depends to some extend on how well a particular audience knows the band. I think that in the past we’ve been a bit spoiled in the UK, and particularly in London, where so many bands play that it’s sometimes hard to get people interested. These days it’s quite hard for foreign bands to play London, and that’s likely to get worse in the near future, unfortunately. We have a really decent and loyal following in London though, and we owe much of any success we’ve had to those people. It’s always special to be invited abroad to play, and a real privilege for us.

SANCTUARY.CZ: AND THE PRIVILIGE IS ALL OURS, TOO! IS THERE ANYTHING YOU WOULD LIKE TO TELL THE CZECH FANS OF GOTH ROCK PRIOR YOUR PREMIERE SHOW IN PRAGUE?

Rob: I can only really say that we’re enormously excited to be playing for you in Prague in March, a city that I’ve always wanted to play, but never have, in any band. It’s extra special for me to be able to play in Prague for the first time with Red Sun Revival, and I hope you’ll enjoy our concert as much as we’ll enjoy your fantastic city.

SANCTUARY.CZ: WE DEFINITELY WILL. TAKE CARE, LOOKING FORWARD TO HEARING YOU SOON IN PRAGUE FOR THE VERY FIRST TIME! 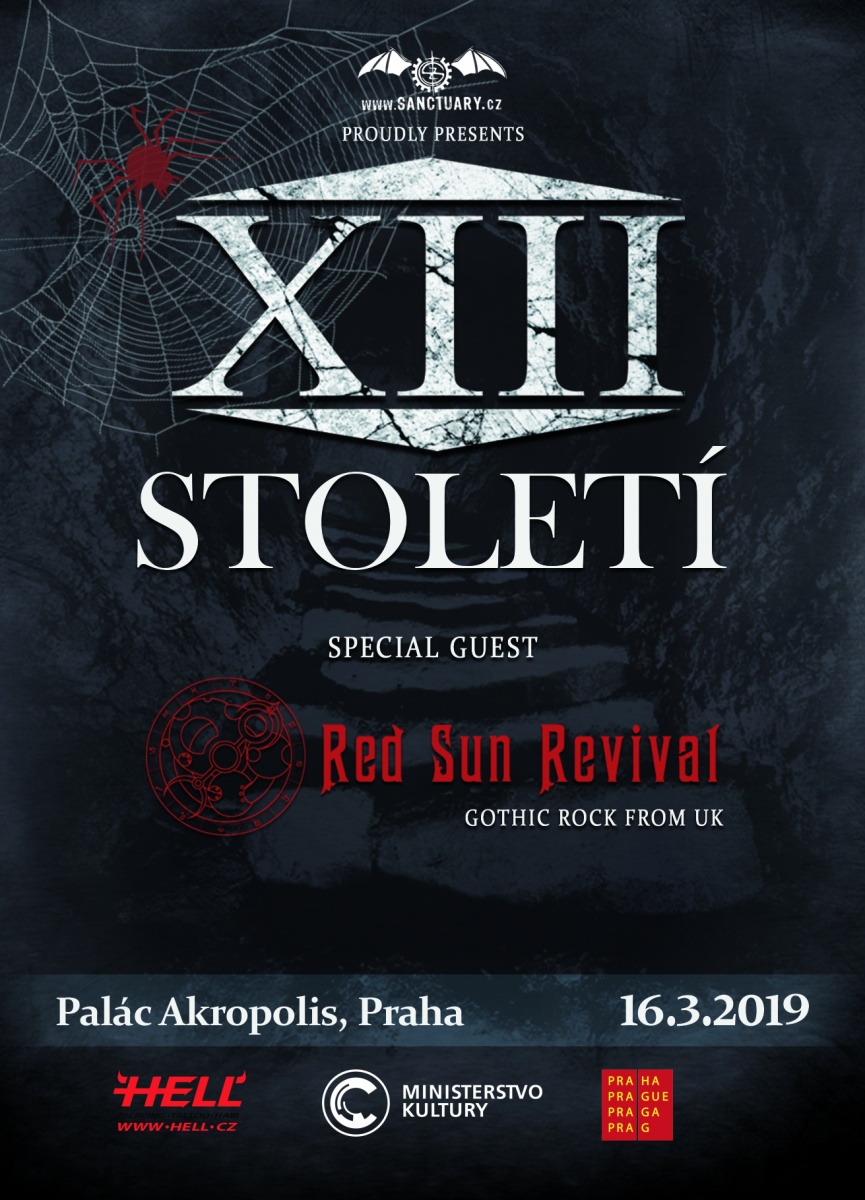