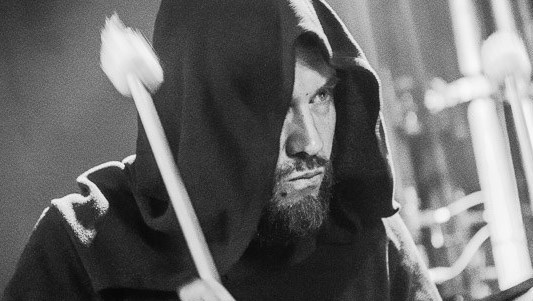 Twelve tracks through the ears of The Devil & The Universe / Whispers in the Shadow frontman.

We wanted to try something new – so we picked 12 different tracks, erased the names and send them to Ashley Dayour to share his opinion with us. Here are the answers with the tracks.

Ah yeah good old Uncle Aleister Crowley. I just wish there would have been more recordings made back then. The few ones who are available have been sampled to death by now. And I consider myself guilty as charged!

That starts really nice indeed. The production is a bit muddy though might be some old underground recording, besides production is not everything. A nice song is a nice song is a nice song…if you know what I mean. I do like the female voice, it reminds me about “Switchblade Symphony”, just the voice not the music though. Of course I do have a thing for such hypnotic rhythmic patterns. I have no idea what that actually is, but I liked it. Good start J.

Ah ok, here comes the so called nu gothic rock brigade. “Tiamat” comes to my mind, the more catchy tunes of course. Funny thing for me is how Gothic Rock got into that metalish Guitars. Back in the 90’s when this became a thing (with Bands like Paradise Lost, Tiamat, Type O…). I was a bit confused by it, but I did like all of these bands which we consider now as the godfathers of Gothic Metal.

Later the whole thing became a bit cheesy though, especially with the extensive use of female vocals and these “you know how the chorus goes even though you haven’t even heard it once” moments like here. Well this one’s actually a bit too catchy for my liking.  And again I have no idea what band that is ;).

What really astonishes me these days is how big the 80’s revival got and for how long it lasts now.

Who would have thought that in 2016 bands will produce stuff that sounds a 120% like the soundtrack to “Miami Vice” or some cheap action movie from back then. Me growing up with all this stuff likes it, of course. And for the third time I have no Idea who this actually is. But I may be forgiven cause there are so many bands these days who jumped on the “total retro 80’s or die” bandwagon, I think they call it synthwave now, If I’m not mistaken. However. I always had a thing for cheap 80’s tunes, so I like it.

Starts with a nice sample. And here comes the it’s so goth you shit bats war drum tom pattern…

Ah! I guess this is xiii století if I’m not mistaken. As you know we opened for them some years ago in Prague. And just recently I had the pleasure again to play before them with The Devil & The Universe and Near Earth Orbit. I’ve been told they were one of the first bands ever in eastern Europe who went for a Gothic Rock sound.

Since I can’t understand the lyrics it’s difficult for me to really say something about this, but I have a lot of respect for them, People always seem to go wild when they play and it was really nice to open for them in Prague in front of a full house. I’m pretty sure it helped our popularity quiet a lot there. I will always remember that.

I think it would be difficult to understand what this is all about if you don’t know Vienna and what is called the “schmäh” (a very Austrian kind of Humor). I have to say, and I’m sure David will forgive me when I say this, I like his new incarnation “Die Buben im Pelz” far better more than this.

BATHORY! Yes! Hammerheart the closing track from Twilight of the Gods.

You know it’s funny. I’m not really into heavy metal stuff at all, there are only a few bands I really like from that genre. Bathory, especially from that era, is one of them. Even though this very one is a bit too cheesy for my liking. I prefer stuff like “Road to Asa Bay” or what is for me their best song “Shores in Flames”. I can’t really tell you why Bathory strikes a chord and other Black Metal/ Viking Metal bands don’t. They have something very unique, even a bit odd at times. I like odd.

Ah ok we are going into the singer songwriter / folk territory now. Very Irish. I don’t know what this is either. But that sounds like a party and drink along song. The lyrics seem to be very funny.  Really funny actually as the song goes on. Especially the ending made me laugh. Nice one.

Musically this is not my cup of tea at all, but I guess that’s not the point here.

A yeah my first guess was right. Well.  A wise person once said: “if you can’t say anything nice don’t say anything at all”. No seriously that kind of music is just not made for me, I simply don’t get it.

However it is indeed  well produced and… well let’s leave it there ;).

A very goth rocky opening. Nosferatu came into my mind at first but that kind of vocals were totally unexpected. I like to be surprised. Hmm I really do like that. Who’s that?

These are really cool female vocals. A bit Skeletal Family style.  My cup of tea entirely.

Yes I’m in :). That’s my favorite from all the songs so far. Now I’m really curious who that is though! Have to check them out.

A yeah, sounds like “In Slaugther Natives” but I’m not sure if it’s really him. I of course do have a thing for cinematic dark music like this. Always had, I mean just listen to The Devil & The Universe. Ah there are Vocals coming in. I expected this to stay an instrumental.

Falco of course. Took me 2 seconds ;) You know his legacy in Austrian Music (and beyond) is still vibrant everywhere. He was the biggest musical thing that ever happened in this country. And rightly so. Especially his first 3 albums are such fantastic pop albums full of tunes that will stay forever in the minds of many and even many to come. Doesn’t matter where you are in the world if you tell people you are from Austria and then after a few drinks it comes to music, naturally with me that always happens, there is always the point the other one mentions Falco.

Lyrically I consider him as one of the best ever. The way he used the German and combined it with English was something totally new. I really have a problem with German Lyrics though, it can get cheap very easily but Falco did it in a way like no one else before or after him, for that matter. Besides he couldn’t have happened anywhere else in the world, he’s so Vienna. Still. My favorite from him however is “Helden von Heute”.

One thing always puzzled me though, not a great lot of people seemed to have realized how much he “borrowed” from David Bowie. Compare “Helden von Heute” with “Heroes” (I mean the title alone), “Junge Römter” with Young Americans and so forth. Don’t get me wrong I don’t consider this a bad thing at all, quite the opposite, I’m just keep wondering that he got away with it. Well that again must prove he actually was a genius.