"I feel tired". Interview with Syco Coeffic about end of audiotrauma labelu a coming festival 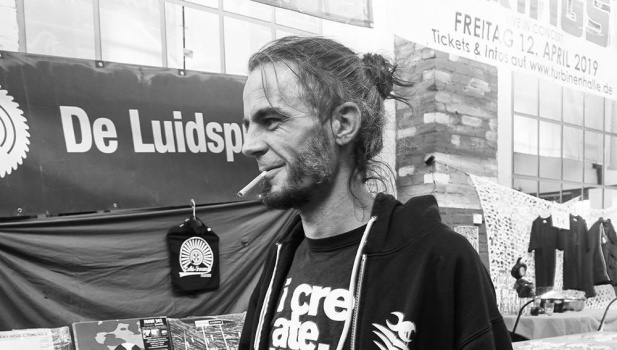 This weekend the Audiotrauma label will officially conclude their activities with its fifth issue of Audiotrauma fest, which will take place on Friday, March 6, and Saturday, March 7, 2020 at Prague's Storm Club. It is right time to get few questions to Syco Coeffic, who has been running Audiotrauma since 2002.

HI SYCO, HOW ARE YOU?

AT FIRST, TELL ME SOMETHING ABOUT YOUR RELATIONSHIP TO CZECH REPUBLIC?

You're not the first to ask. I can say now, it's a real love between me, the label and your country. Alternative audience here is really awesome et the country itself is beautiful and with a special atmosphere we cannot find in France now...

HOW IT HAPPENED THAT LABEL FROM FRANCE STARTED TO ORGANIZE OWN FESTIVAL IN PRAGUE?

That’s a good question. First, I guess because of one guy: my friend Michal (who plays in M.A.C of Mad). I met him in Olomouc, during the Moravian industrial fest. This guy is simply one of the best person I ever met...

We talked a lot about everything, music, travel etc... and after some gigs together (Chrysalide and MAC of mad) the idea of a festival sprang up.

That’s right. Noxious Art Fest was a kind of legendary festival in our scene. First editions in 2004 and 2005 were totally crazy. 70 live act during 48h in the French country with 1000 people from everywhere in Europe.

After the 2 first editions we decided to make some mess in the capital...to continue our noize invasion... after the 5th edition we decided to stop because it started to be more and more complicated and expensive to organise it in Paris.

FIRST ISSUE OF AUDIOTRAUMA FEST RUN IN 2015. WHAT WAS THE BIGGEST CHALLENGE DURING THE FESTIVAL HISTORY?

To be honnest the biggest problem is still always the money and the stress that goes with it. Except that, it's only a pleasure.

CAN YOU REVEAL THE LINE-UP OF THIS YEAR ISSUE OF AUDIOTRAUMA FEST?

I can't talk about the 13 live acts booked, but I can call your attention to ESA, DIVE, MOAAN EXIS, IMMINENT or BOLEHLAV... but all the festival program is of a very high quality, live act but the DJs as well.

I really recommend to the audience to be curious and listen everything before.

WHAT PROJECT ARE YOU LOOKING FORWARD TO MOST?

In 2002 we organised our first big party with IMMINENT as guest... he'll come full circle somehow.

WHAT DO YOU CONSIDER TO BE THE GREATEST SUCCESS OF THE FESTIVAL? WHAT PROJECT ARE YOU MOST PROUD TO HAVE BROUGHT TO PRAGUE?

It's hard to tell... I loved all the bands we invited to play and 80% of the previous programs were bands from my label audiotrauma...So I’m still proud of all of them.

ON THE OTHER SIDE, IS THERE ANY PROJECT OR BAND THAT YOU WANTED TO HAVE A FESTIVAL ON THE ROSTER, BUT IT NEVER HAPPENED?

I expected to get IMPERIAL BLACK UNIT for this edition but actually it couldn't be done... I love their sound.

IF I UNDERSTAND WELL THIS YEAR ISSUE IS THE LAST ONE? WHY?

Because I feel very tired. I'm closing the label. Too much stress about money and all the rest, and this stress is killing me slowly.

Organizing an alternative festival is like playing Russian roulette every year. And it's exhausting. I organise fests since 20 years and now I need some calm in my life. I know I will regret all that beautiful moments but I’m really tired...

WHAT ABOUT AUDIOTRAUMA LABEL FUTURE?I SEE THAT YOU ARE RELEASING HINTERWELT AND 2KILOS& MORE ALBUMS....

I will release 1 or 2 more physical releases to finish the program I made last year and I will close it. To run a label in 2020 is more than complicated. You have more and more work for less and less income. I'm proud of what we do all together but what begins must someday end.

WHAT ABOUT FUTURE PLANS WITH CHRYSALIDE?

Good question. I've been asked this question maybe 50 times this year. To be honest, I don't know. We need something deep to find the way...

MOTTO OF AUDIOTRAUMA LABEL IS "EVERYTHING STARTS WITH A TRAUMA". HOW IT ENDS?

With a Trauma of course!!! So join us next weekend !!!

We will see. I need some rest... Noize will always be somewhere inside me, so who knows what could happen in the future.