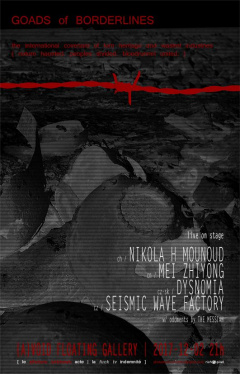 the
international
covenant
of
lorn
heritage
and
wastrel
industries

The sound artist, musician, noisician, performer, composer, improviser or whatever you like to call it (depends largely on your taste). Nico is the soundless moniker of Nikola H. Mounoud. Riding many musical waves as anywone do, he focus his work on the exploration in real time of analog, digital and hybrid feedbacks (larsen) using a laptop computer and an analog mixer. Unlike chords, wind and skins of acoustic sound, feedback is an unstoppable implacable sonic evolution.

For more wordy concepts or description it may be easier to turn your interest towards writers instead of a sound artist, musician, nois...

Meizhiyong is China's most important international noise experimenter and hardware noise instrument DIYER. He is also active in independent film and photography, etc. Meizhiyong thinks that noise is the carrier of breaking all the rules, only impaling nothingness will real make you get rid of the contradiction between voice and body, between body and mind. The sign of his performance is the strong acting style and the electronic musical Instruments transformed by hacking and circut-bending.

Meizhiyong has already toured in Europe and Japan successively since 2014. He is now becoming the new blood of the noise and the experimental music in Asia.

Sometimes feeling like walking through the alley alongside the day to day ephemeral torsos, wastelands, abysses and apocalypses, passing them by, by the gnosis and the sense of the oblivion. Another time deluged in ecstasy and peace but always keeping prepared and cherishing the wings.

Symbiosis of unbalanced waveforms collapsing the firm ground and listener's throne into the blinding, glaring red smelt. By inhaling it and carving the scars into the time, the randomized powers releases the maze into a new entity, the barbaric etheral solid freestone. Sonorous vivid torch of the drone burst compounded with furious vociferous ramble emissions drain the mind from the short bone shelter into the interstellar habitat.

The void and the wild chord.

The storm that brings ecstasy and feelings of the transformation through the sound, the spirit and the fire. The imagery of master-slave relationship, the embodiment of human alienation, those are information transmitted by the cyber-apostles for the next century, for hybrids and clons century.