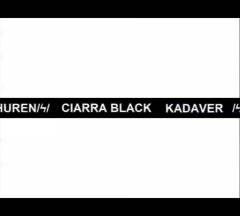 Ciarra Black is a Brooklyn based producer and DJ. Co-founder of the label and event series No-Tech, she explores the borderlands between noise and techno, and as one half of the celebrated duo Appetite (Ascetic House), she crafts more noisy, avant-garde soundscapes. She recently released her tape “Pendulum,” powerful proof of her abrasive, rhythmic sound. Originally from New Jersey, she first got into electronic music through friends who were involved in the noise scene in Philly. Ciarra eventually found her way into techno where she would eventually play at clubs Medusa & Inciting HQ, two of Philly's most underground spots at the time. After moving to Brooklyn, she has made quite the name for herself in the local techno scene. Frequenting lineups at popular nightlife spots Bossa Nova Civic Club and Trans Pecos, in addition to having played for promoters such as Long Count Cycle and Alone Together; she is an artist who stands out with a sound that can only be described as her own.

☆HUREN☆ is the solo-entity of David Foster, spawning in 90's abyss from the trauma of the Teste. From then owards through Zhark Recordings Berlin ☆HUREN☆ forged some of the earliest industrial-ravaged dark techno - a species of sound that continues to infiltrate the underground™ club circuit world-wide.
Foster’s other aliases include MRTVI, Obscene Mannequin, AVM with Blush Response, and O/H conspiring with Rich Oddie of Orphx with releases on Opal Tapes, Electric Deluxe and Inner Surface Music.
Originally from Canada, Berlin based ☆HUREN☆ thrusts ahead with a slew of releases/remixes on Zhark Berlin, Noiztank, Amok Tapes, Low Income $quad, Parabola, Clan Destine, Edit Select, Overdraw, Total Black…