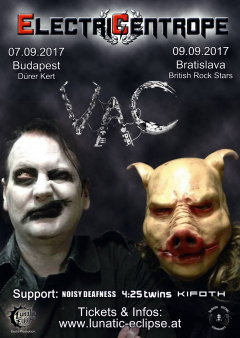 
--> VELVET ACID CHRIST started in the early 90s and is a mixture of many music styles. Due to their various releases VAC can't be discribed with one word. It sounds like Industrial Trip-hop Trance, like EBM, Techno, or even like Goth or Darkwave.

And that's what fans love on Velvet Acid Christ! Every live show is uniqe due to the vast selection of tracks. More than 20 albums, singles, compilations and dozens of remixes have so far been released on multiple formats and plattforms. Concerts in more than 30 states, with many famous bands accross the gothic, industrial and dark electro scene, as well as gigs on the biggest festivals are bookmarks of VAC and attracting fans all over the globe!

--> NOISY DEAFNESS: the Hungarian electronic solo formation, was formed in 2013 by István Lászlók.
The debut album „Silent Remembrance” was released in October 2015 by Electro Arc in digital
form, and in February 2016 on CD.
As for the music style it is a unique mixture of underground dance electronics, EBM and dark
electro-pop sounds savoured with some industrial sounds.
The material of the album was presented on live gigs in several cities in Hungary. Noisy Deafness
was the opening band before Leaether Strip in 2015, and Front Line Assembly in 2016 in
Budapest.

--> KIFOTH: Mr Colon (vocals, lyrics, sampling and programming) and K-Head (composing, programming, sampling and acoustic performance) have started their career in 1993 under the moniker KNEEL IN FRONT OF THE HANGMAN, they later renamed their music project into KNEEL IN FRONT OF THE EXECUTIONER. The abbreviation KIFOTH is therefore adapted from their first created band name, while KNEEL IN FRONT OF THE EXECUTIONER is still the valid term.
The first demo tape in 1995 entitled “First Time Public”, which is a recording of their first live performance in Bratislava. Nearly to the same time KIFOTH have recorded their first album “Civillizative Collapse”, which could grab some attention thanks to the help of the Crewzine mail order. But the best was yet to come and the year 1996 can be named as being one of the most important years in the career of KIFOTH. They could release their second demo “Ebola” and especially this tape caught euphoric reactions by the European press and audience.
In 1999 KIFOTH could internationally release their first official CD “Spectaclebreakers” with the helping hand of the German giant Out Of Line. A tour together with HOCICO and CULTURE KULTUR followed and brought the. The year 2001 then brought the second CD release on the Out Of Line label entitled “Fundamentum Divisionis”. After some further gigs and a horrible car accident by mir Colon it got silent around this band.
First signs of a possible return was their remix work for GRANDCHAOS in the 2006 on the often mentioned “In Sedens” DCD set. The things have been worked out in the right direction, KIFOTH have signed a new contract to E.A.R./Vendetta-Music and the result is a new studio album “ACERBITY TORRENT”nice packaged in a digi-pack and with more than 70 minutes of their musically dimension. KIFOTH offer like expected an energetic kind of EBM structures, combined with layered Dark Electro tunes and some slight integrated Techno influences (“Tyranny”). They may can be count as being pretty well based into a kind of old-school EBM, although their outcome is more diverse. The executioners let out even message that they feel themselves more generous according to their electronical being. They’re extremely fastidious on themselves. As frontmen’s conffesion: "The Acerbity Torrrent album is slushed with blood of abused, full of desperation tears, worried by hopeless sob. It is full of my drafts of hate toward man slightness, toward my mate. All this under circumstances of being modern civilization".
The forthcoming album “VIOLENCE CORPORATION” has risen similarly as the “Acerbity Torrent”. The composing took about 2 years. The music is well-knitted. The authors fixed themselves making the mixing better than ever before. Therefore, the intention is to keep the little difference as maximal as possible but the compactness should stay inviolate. "I am surprised that it sounds fine even if it has been described so intricately. I had a chance to be closed in the studio with KIFOTH while songs 10 Fingers, In Depression, Victim, Manipulator were mixed on. Very tough experience. To summarize as the “Violence Corporation” is focused on balanced sound composition, striking singing plains. As well as uncommon tunes that sounds often like unearthly trip", cEnda.