All Your Sisters (USA) & Introspekce 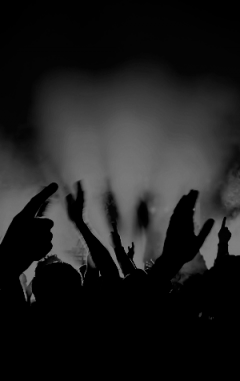 A band with a name such as All Your Sisters, whose two sole members are men, is not surprisingly a little hard to nail down. Ambiguity extends to the bands genre as well. “I think All Your Sisters is a lot of things: post punk, industrial, noise, ambient,” says frontman Jordan Morrison. The duo, who hail from the deceivingly sunny city of San Francisco, have one foot planted firmly in darkwave and post-punk, leaving the other free to wade through a variety of unconventional influences. Their forthcoming album, Uncomfortable Skin is steeped in nostalgia, but entirely contemporary and album’s first single “Open Wide,” seamlessly shifts between genres, yielding a sound that is both brooding and catchy.

After the dissolution of his previous band, Morrison (guitar, synth, vocals) formed All Your Sisters as a solo project, then moved from Reno to San Francisco where he eventually brought like-minded musician Mario Armando Ruiz (bass, synth) into the fold. The duo connected immediately, bonding over their tumultuous upbringings and dark personal tragedies. Their first album, Modern Failures was released by Belaten in 2014 and then on vinyl by Weyrd Son Records. It was followed by a successful European tour in 2015. All Your Sisters performs with a palpable sense of urgency. “I get physically and mentally ill if I’m unable to play music for stretches. It’s perhaps the only way I know how to express myself,” says Morrison.

Morrison draws on his personal experiences for lyrical inspiration, especially his time spent working as an EMT. “I was 19, living in Las Vegas and driving an ambulance,” he says. “I became a full blown paramedic by the time I was 23. I eventually moved to Reno and worked for a few more years. The job started to wear on me. I saw the worst things you can imagine. People in their worst, most vulnerable states. There was definitely no sign of a god anywhere. I can’t un-see a lot of what I saw. These images might be in my head forever. So the feelings from it kind of sneak their way into the lyrics.”

Uncomfortable Skin arrives courtesy of The Flenser on July 8th, 2016.